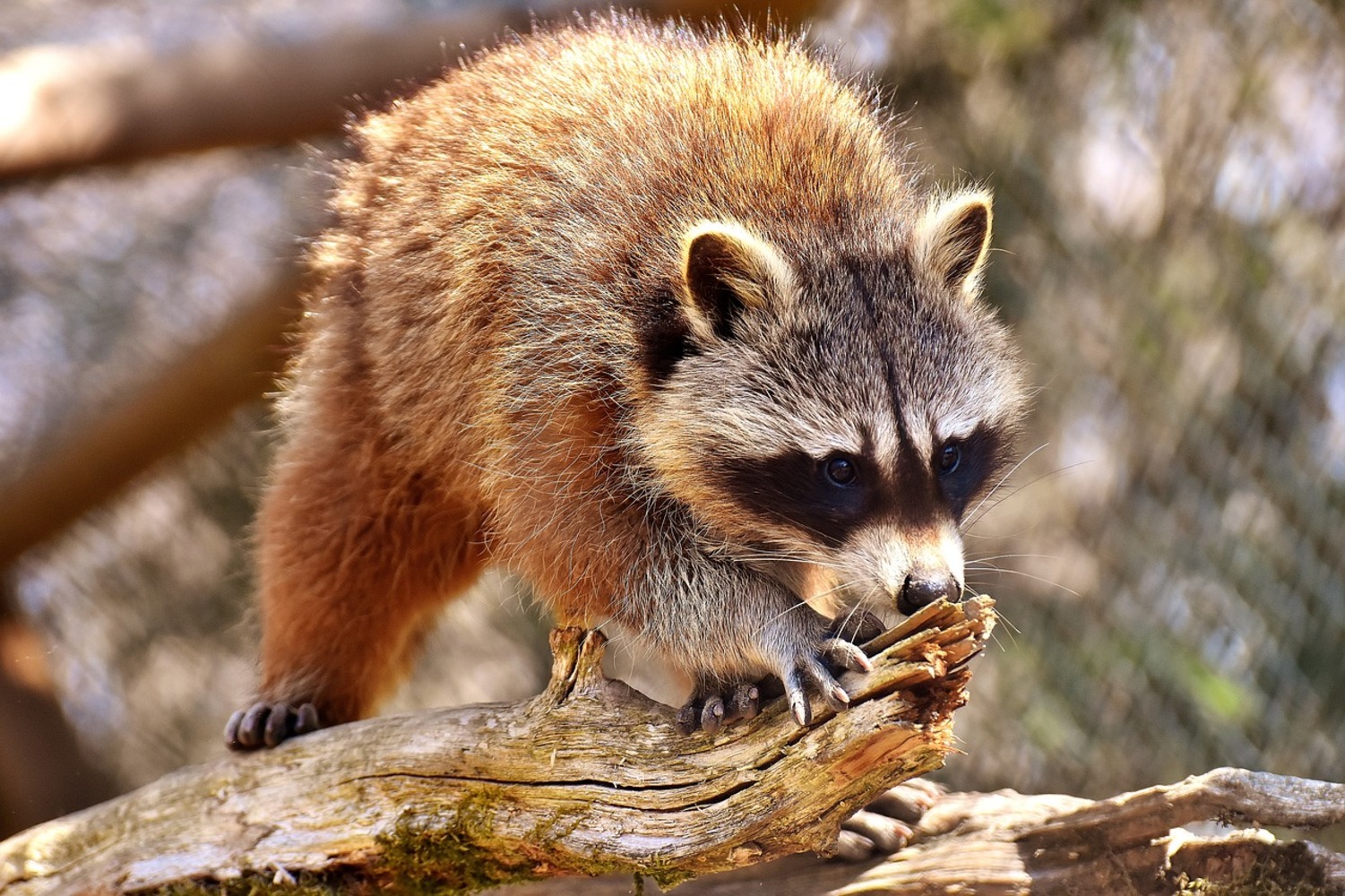 Round, furry animals with bushy tails and a black fur mask covering the region of their eyes are racoons. These animals can look like cute cuddly robbers, but when confronted or cornered, raccoons are dangerous1Raccoons have sharp teeth, claws, and the ability to do serious harm. If a person is within reach of a raccoon’s mouth, it may lunge and bite. Most common attacks happen because a mother raccoon feels there is a threat against her babies. They can shred through human skin like butter leaving behind a nasty gash. In many cases, people who have been bitten by a raccoon needed stiches. .

Bandit-masked raccoons are a familiar sight just about everywhere in north America and they eat just about everything. In forests, marshes, prairies, and even in cities, these ubiquitous mammals are found. They are adaptable and find/feast on a wide range of food using their dexterous front paws and long fingers. 2Go To Source nationalgeographic.com -“Raccoon”

The coloration of the raccoon ranges from grey/black to reddish brown, but varies with the habitat the raccoon is found in. Raccoons have a stocky build and are usually six to seven kilograms in weight. Typically, males are heavier than females. The length of the body ranges from 603 to 950 mm. 3Go To Source naturemappingfoundation.com -“Raccoon”

These animals foraged along tropical riverbanks once upon a time. By moving north and adapting to whatever territory suited them, they extended their habitat. Clever animals in cold northern winters, they learned to take shelter in barns and homes to keep warm. The raccoon habitat4Raccoons can be found as far north as Canada and as far south as Panama. The raccoon is a special species because of how adaptable they are. Raccoons have migrated to urban areas as their natural habitat has been invaded by humans. As long as food, water, and shelter is provided, the raccoon will thrive. Once they understand where food and water are provided, it will prove difficult to prevent raccoons from returning to the area. has adjusted to urban life as their natural environment shrinks and there are not many areas in which the raccoon can’t survive.

These adaptable characteristics will make it easy for raccoons to find a place to call home, whether on a farm, in a marsh, prairie or in the forest. A raccoon’s home depends on his environment. Raccoons prefer dark, dry and warm areas which provide protection from predators such as dog packs or coyotes. As a resting spot, tree cavities, a rocky cavern or hollow logs suit the raccoon species well. Most wildlife can’t survive in urban setting, but of course the easygoing raccoon can do it. Raccoons survive in urban settings by taking advantage of drainpipes, crawl spaces, garbage bins, basements and attics.5Go To Source animals.mom.com -“The Natural Habitat Of The Raccoon”

As omnivores, raccoons eat meat and plants. Typical raccoon diets6Raccoon diets vary depending on the habitat they live in. Raccoons in the forest will eat, nuts, berries and smaller prey. Raccoons in urban environments often look to humans for food. Raccoons do not need food from humans to survive. Wild animals have specialized diets. They can become malnourished or die if fed the wrong foods. Animals accustomed to people often lose their fear of people and can become aggressive. include: cherries, apples, acorns, persimmons, bananas, peaches, citrus fruit, plums, wild grapes, figs, watermelons, beech nuts, corn and walnuts.

When it comes to meat, raccoons consume more invertebrates than vertebrates. Frogs, frogs, crayfish, birds, mice and bird eggs are some of the raccoon’s favorite meat treats. Raccoons aren’t beyond scavenging human garbage or eating roadkill when food is scarce. It is common to see raccoons rummaging around garbage bins. 7Go To Source livescience.com -“Facts About Raccoons”

Raccoons are known to bear infectious diseases in the United States that can be spread to humans and animals that come into contact with sick raccoons8A wide range of different infectious diseases including bacteria, viruses and parasites are spreadable to humans by raccoons. The most common disease found in raccoons is rabies and typically can be diagnosed by looking at the animal. Scratches, bites and saliva are all ways disease are transported. or their waste. Raccoons, both young and old, will transmit viruses, bacteria and parasites that can lead to infections and disease when exposed to humans and animals. Without proper protection and adequate preparation, people should not come into contact with raccoons or their waste.

Any person of any age who has come into contact with a raccoon, should immediately contact a health professional. Individuals who have engaged in any raccoon handling, treatment, feeding and cleaning should be tested for exposure to diseases and notified of any possible threats to human health caused by the raccoon diseases. 9Go To Source dem.ri.gov -“Infectious Diseases Of Raccoons”

Raccoon damage10Raccoons can cause thousands of dollars in property damage and pose a threat to people/pets. Hunting and trapping may help reduce these problems, but can’t eliminate the threat of raccoon damage. Whether the animals are in your yard or in the attic, damage can happen anywhere and force you to call a wildlife removal expert. The animals will eat everything in sight leaving a path of destruction behind them, destroying gardens and fruit trees. Raccoon attic damage is the most common type of damage because the animals tend to nest in places that are warm and provide protection from predators. extends to disease because they may have rabies and their droppings contain deadly parasites. In order to remove the animal safely, you must call a wildlife professional if you have a raccoon in your home. As racoons are crafty and unpredictable, do not attempt to capture or remove the animal yourself.