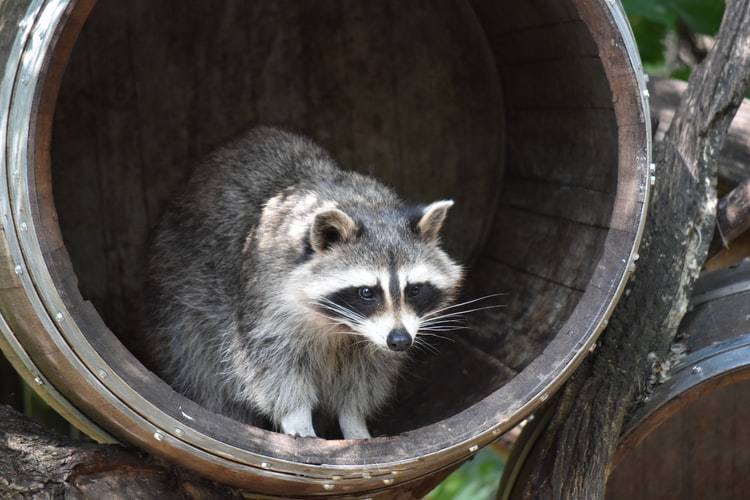 Originally, raccoons were creatures of the forest. Nonetheless, raccoons have been popular everywhere since European colonization. Raccoons can be found deep in the woods, running around city streets and forging for food in a suburban backyard. 1Go To Source maine.gov -“Raccoon”

As nocturnal animals, the raccoon species prefer to sleep throughout the day and adventure during the night. Though raccoons can survive pretty much any environment, they still have three things they consider when looking for a home.

Another factor for raccoons searching for a home is a place safe from predators. Creating nests high in trees or in attics provide capable protection for a family of raccoons.

The last factor raccoon homes is shelter. Raccoons will search for a home that provides warmth, protection from rain and a place that is dark. Since raccoons prefer somewhere that is dark, attics and hollow trees are popular raccoon nest places.

Their chosen natural environments were woodlands prior to urbanization, preferably areas with water sources where they could search for crustaceans.

These animals can be found as far north as Canada in their natural range, and as far south as Panama. Their ranges were restricted before urbanization to areas with easy access to water and aquatic prey. Nowadays they are spread practically around the whole continent.

Almost half of their diet naturally consists of crustaceans, butterflies, mollusks, and other invertebrates. Plants make up most of their diet with smaller animals taking a smaller portion of the raccoon diet. Rather than birds or mammals, they prefer feeding on crabs and other easy-to-catch prey. 2Go To Source animals.net -“Raccoon”

Raccoons have migrated to urban areas as their natural habitat has been invaded by humans. Once an animal of the forest, raccoons have become an urban wildlife species. Raccoons are a special species because of how adaptable they are. As long as food, water, and shelter is provided, the raccoon will thrive.

Man made gardens and dumpsters provide an abundance of food for raccoons. They are creatures of habit and will continue to go to the same garden/dumpster as long as the food source is continued to be provided. Once they understand where food and water is provided, it will prove difficult to prevent raccoons from returning to the area.

Man made structures have made raccoons search for shelter much easier. Attics and crawlspaces are prefect homes for raccoons to stay warm and raise their young. Openings in attics provide easy access from raccoons to enter for sleep and leave to search for food/water.

What Habitats Do Raccoons Avoid?

Raccoons prefer dark quiet areas, as they are nocturnal animals. Bright lights will deter raccoons from coming around your home. Loud noises make it difficult for raccoons to feel comfortable. If the animal feels constantly on edge, it will search for a quieter area where the raccoon can relax and free from any threats. Areas that are scarce of food and water will not frequent raccoons. Since they prefer a constant food source, raccoons will continue to travel until a constant food source is found.