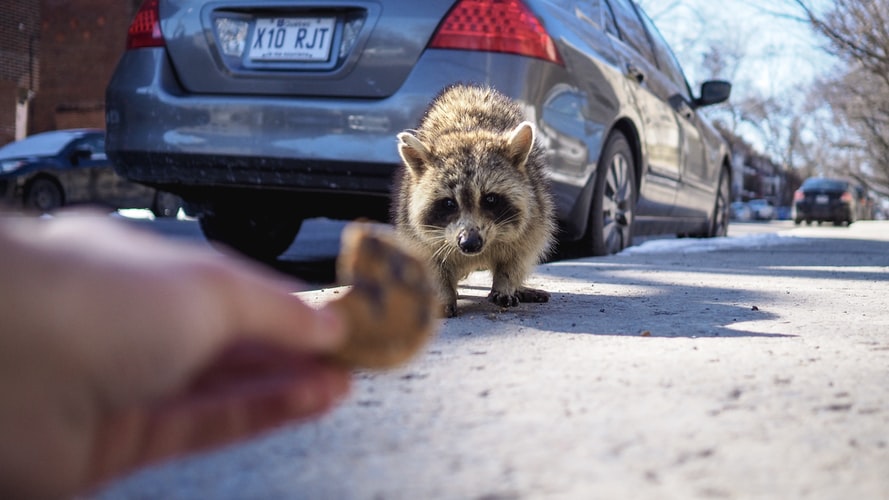 Sometimes the cuteness of raccoons is the cause of an attack. They look like some sort of exotic pet and might even act like a pet. They can come close and take food right from your fingertips if you feed them, without harming you at all. But it’s not smart to feed raccoons at all because if they feel even a tad threated, they will lash out.

Just like any other wildlife species, raccoons have the fight or flight mentality. If a raccoon feels as if it’s being threated, it will scratch or bite. Most common attacks happen because a mother raccoon feels there is a threat against her babies and is protect them. Though a raccoon appears friendly, always approach the animal with caution.

How Do Raccoons Attack?

Raccoons are quick and intelligent animals. They have sharp teeth, claws, and  have the ability to do serious harm. If a person is within reach of a raccoon’s mouth, it may lunge and bite. Their sharp teeth aid them in hunting allowing them to kill prey quickly. The same goes for biting people. Raccoon teeth can shred through human skin like butter leaving behind a nasty gash. In many cases, people who have been bitten by a raccoon needed stiches.

The animal is also well known for having human hand like claws. It may be fun to watch a raccoon grab items like a person, but it may not be as fun when the animal is using it’s claws to scratch you. As nimble animals, a raccoon can scratch you in the blink of an eye. If you hear a raccoon snarling, keep your distance to prevent a bite or scratch.

Is It Bad To Be Attacked By A Raccoon?

Though the bite or scratch of raccoon may not be life threating, the diseases carried by the animal can be. Just like any wildlife species, raccoons can carry diseases blind to the human eye. Disease raccoons carry that are spreadable to humans include: Rabies, Roundworm and Leptospirosis.

Raccoons are considered a major carrier of the rabies virus in the United States, along with foxes, skunks, and bats. Although rabies can be carried by any warm-blooded animal, raccoons are often called the “vector species of rabies.”1Go To Source humanesociety.org -“Raccoons And Public Health”

Leptospirosis is a bacterium that can infect raccoons, skunks, opossums, rats, rabbits, and white-tailed deer. Being bit or scratched by a raccoon that is infected with leptospirosis makes a human susceptible to the bacteria’s symptoms. 2Go To Source humanesociety.org -“Raccoons And Public Health”

What To Do After A Raccoon Attack?

For a minimum of five minutes, wash the wound with soap and water. Go to the doctor as soon as possible, so that the doctor can determine if you need further medical treatment.

Contact your local officer in charge of animal control. If you are close to the animal that bit you, watch the animal for symptoms of rabies or other diseases. The animal control officer will attempt to trap the raccoon and then it will be killed so that it can be checked for rabies.