Diet Of The Raccoon 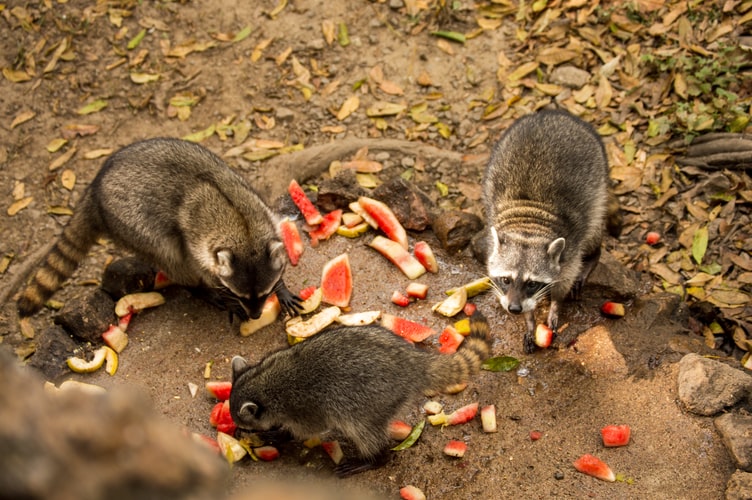 Raccoons are omnivores that consume a wide range of species. They have a strong jaw equipped with sharp teeth that allow the animal to consumer both plants and small prey. 1Go To Source peta.org -“Living in Harmony With Raccoons”

It’s well known that raccoons are an adaptable species and that allows them to alter their diet based on their habitat,. As raccoons can be found in both rural and urban areas, their diet can change drastically. Examples of this is racoons expecting people to feed them in urban areas. Since wild raccoons are not accustom to humans feeding them, raccoons in rural areas will keep a further distance from humans.

What Do Raccoons In The Wild Eat?

Raccoons are scavengers, so almost everything can be eaten by them. They will seek out some of their favorite foods if they continue to live undisturbed in the forest. Raccoons living in the forest are fond of food that comes fresh from the water including snails, frogs, fish, clams, and crayfish.

Raccoons can also seek out additional food sources while living in the forest, such as slugs, worms, bird eggs, and even birds. They like herbs, fruits, seeds and nuts very much too. If given the opportunity, raccoons will even scavenge dead animals as a source of food.

Raccoons are lazy and they just don’t like having to hunt for their food. They prefer food that is available readily. In most urban areas, raccoons have learned how to adapt and find food that seems to be only waiting for them to come and take it with their habitats being smaller or vanishing.

Raccoons have learned how to open coolers and garbage cans with latches. At a camp site, they can help themselves to hotdogs and hamburgers, and eat discarded dinner foods, such as chicken, crabs, shrimp, donuts, bread, watermelon, and a peanut butter and jelly sandwich left over from a trash can. Raccoons aren’t very picky. If the food is fresh or rotten, they do not care. They’ve even been seen eating new roadkill.

Also without pet food, the urban raccoon diets will not be complete. Particularly in warmer climates, the food plate is often left behind when pet owners bring their animals in for the night. There’s no doubt that by morning it will be empty. Raccoons also have a good sense of memory so that they can recall precisely where the food dish was or where the trash could be and night after night they will return.

Wild animals, human food is not nutritious and they do not need food from humans to survive. Wild animals have specialized diets, and if fed the wrong foods, they may become malnourished or die. Animals can also not separate food from wrappers or foil and can get sick of eating these items.

Feeding leads to questions regarding public health. In one area, too many animals increase the risk of disease transmission to humans and among other wildlife. After raccoons go through the food, the scraps left behind can contain diseases.

Animals accustomed to individuals frequently lose their fear of individuals and may become aggressive. Sure a raccoon you’re feeding may be nice to you, but when the next person walking by may not have food and the raccoon could attack them. This also will lead to the raccoon being killed because once it attacks a person, it must be killed and tested for rabies. 2Go To Source aphis.usda.gov -“Don’t Feed the Wildlife”