The City Of Tampa Florida 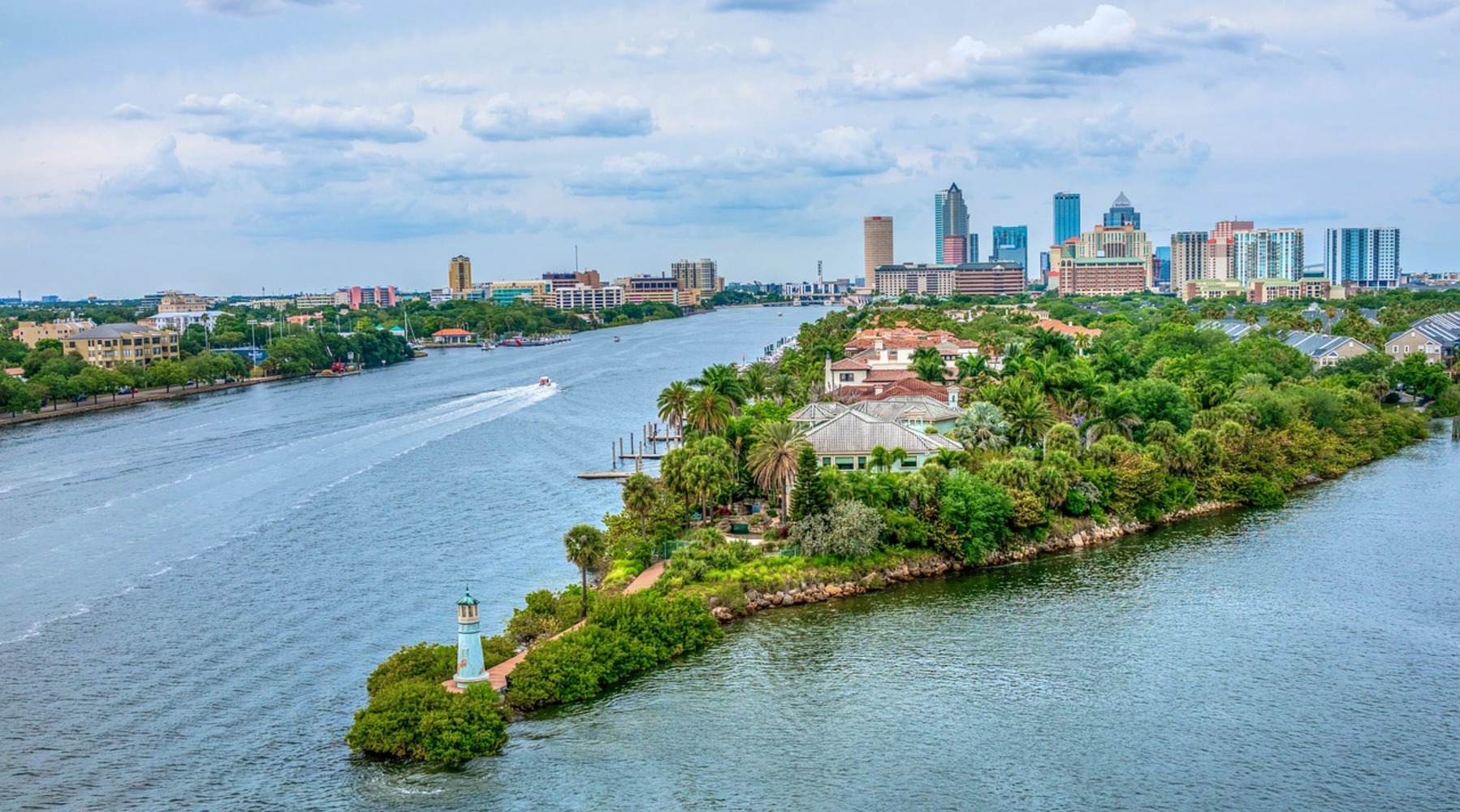 Tampa is the largest city in Hillsborough County, the county seat, and Florida’s third most populous city. It is situated approximately 200 miles northwest of Miami, 180 miles southwest of Jacksonville, and 85 miles east of the near Orlando, Florida area.

The city’s population accounts for around one-third of Hillsborough County’s total population. The economy of Tampa is based on a diverse base that includes tourism, agriculture, construction, finance, health care, government, technology, and Tampa port.1Go To Source Tampagov.net -“About Us”

The city has a total area of 175.3 square miles, including 113.4 square miles of land and 61.8 square miles of water, according to the United States Census Bureau. The highest point is just 48 feet above sea level in the city.

Tampa is bordered by two bodies of water, Old Tampa Bay and Hillsborough Bay, which in turn flow into the Gulf of Mexico, flowing together to form Tampa Bay. The Hillsborough River flows directly in front of Downtown Tampa into Hillsborough Bay, providing Tampa’s only fresh water outlet.

The Palm River, located at the northeast end of Hillsborough Bay, is a smaller river flowing from just east of the city into McKay Bay, which is a smaller inlet. The geography of Tampa is marked by the Interbay Peninsula, which separates Old Tampa Bay from Hillsborough Bay.2Go To Source britannica.com -“Tampa Florida United States”

A humid subtropical climate is present in Tampa. As it sits on the peninsula between Tampa Bay and the Gulf of Mexico, summers are characteristically hot and humid with frequent thunderstorms. The winters are dry and mild, with bright skies for the most part.

With the average daily highs and lows hardly within a few degrees of the record highs and lows, the temperatures are surprisingly invariable. Throughout the year, closeness to large water bodies imparts a high amount of humidity. During the summer, high temperatures exceed 90 ° F, while during the winter, low temperatures drop to 52 ° F.

From May to October, a popular rainy season lasts, and the summer accounts for almost two-thirds of the overall annual rainfall of 49.6. During the summer, lightning and hurricanes are common features of Tampa’s weather. The dry season is sunny and cool, covering the remaining part of the year from November to April. 3Go To Source weather-us.com -“The Climate Of Tampa Florida”

Tampa, FL has become a prominent sports city in America. With four professional sporting teams, the city has something that can interest everyone. Professional sports that can be found in Tampa include baseball, football, hockey and soccer.

The “Bucs”, as they are called by most locals, is a football team that began to play in 1976. The Bucs currently compete in the South Division of the National Football Conference. The Atlanta Falcons, the Carolina Panthers and the New Orleans Saints are the other teams in the division. They play at Raymond James Stadium, which is located north of Interstate 275 on Dale Mabry Highway in Tampa Florida.

The Tampa Bay Lighting, a National Hockey League player, started playing in 1992. They played their first games at the Florida State Fairgrounds in the Expo Hall, then relocated to St. Petersburg’s Florida Suncoast Dome, which was called The ThunderDome. The team relocated to their new venue, Amalie Arena (originally known as the Ice Palace) in downtown Tampa in 1996.

In 1998, the Rays, originally referred to as the Devil Rays, started playing in Major League Baseball. The home field of the team has been Tropicana Field throughout their lifetime. This is the same stadium where the Lightning played.

Directions From Orlando To Tampa

If you were to drive from Orlando, Florida to Tampa, Florida it would take around 1 hour and 20 min. Driving directions from Orlando to Tampa.

Tampa is best known for its tourist attractions, especially Busch Gardens, where families get the thrill of an amusement park in one place and the fun of a zoo. There are many other popular places devoted to animals and wildlife in the city, including a zoo, an aquarium, a big cat sanctuary, and a viewing area for public manatees.

Tampa is a perfect location for vacationing families, with all this, plus an outstanding science museum and children’s museum. Downtown Tampa is a high-rise office block neighborhood, but there are historic old quarters in Tampa too including Ybor City and Old Hyde Park. Franklin Street is downtown Tampa’s pedestrian hub, where you’ll find plenty of shopping, restaurants, and things to do.