Armadillos In Florida & What They Will Do To Your Property 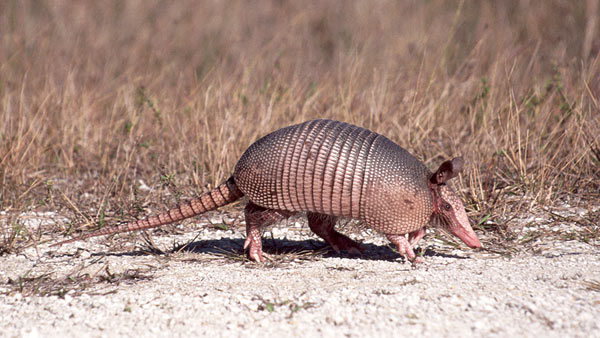 What Exactly Is An Armadillo?

Armadillos are western mammals noted for their distinctive shell-like armor and are known for their digging habits. One species in particular has made its way into the southern United States-the nine-banded armadillo, and is the subject of this page.

The armadillo’s armor works well versus a lot of predators, but not versus automobiles. They are often referred to as the “Hillbilly Speed Bump” for their tendency to get run over by vehicles.1Source Live Science Go To Source

The majority of the 20 types inhabit open locations, such as grasslands, however some also reside in forests. All armadillos possess a set of plates called the carapace that covers much of the body, including the head and, in most types, the legs and tail.2Source Britannica Go To Source 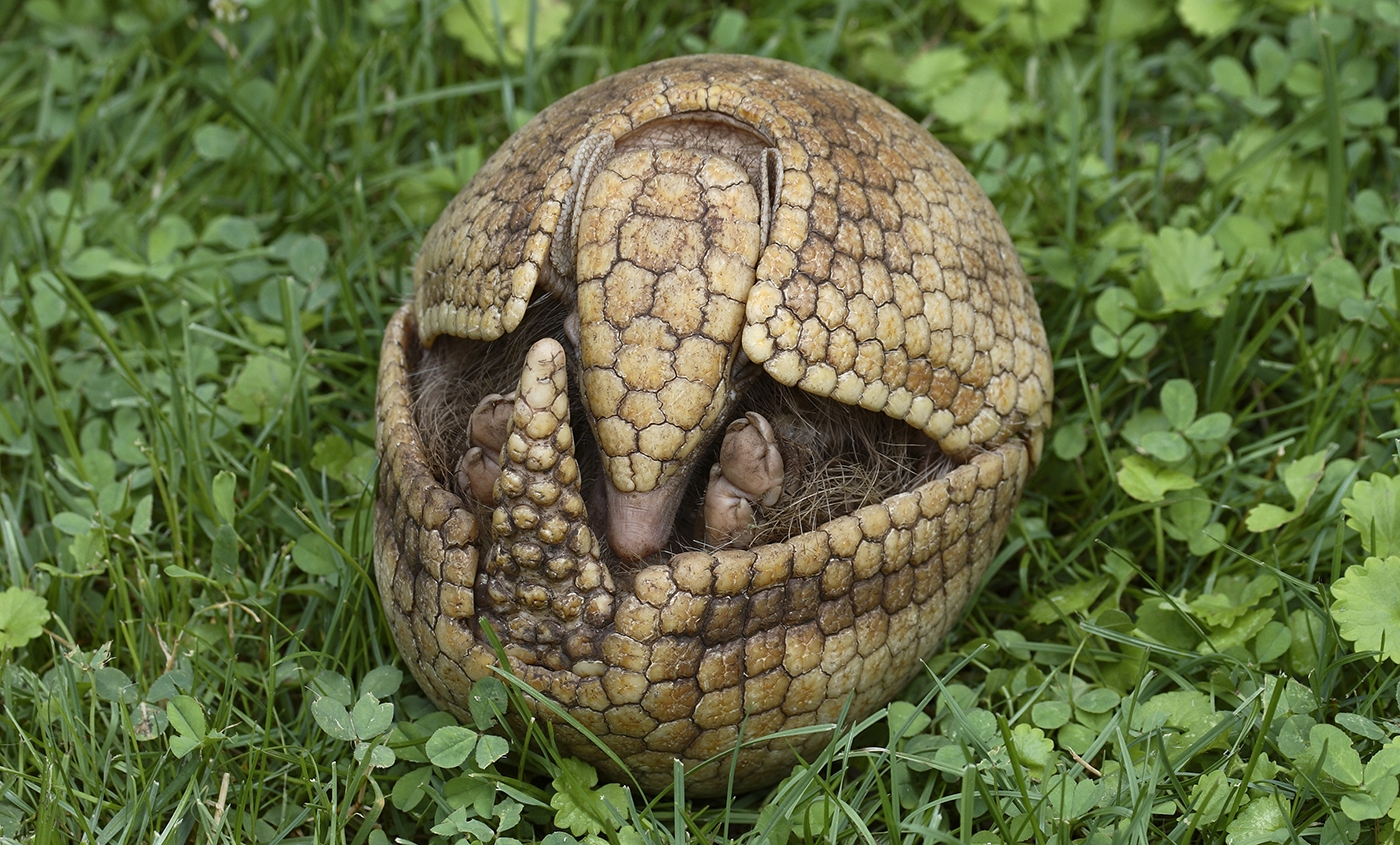 There are at least 21 distinct armadillo types, each with a distinctive appearance of its own. The largest species is almost 5 ft. long and weights as much as 119 lbs. The smallest species is just 5 to 6 inches long and weighs just under a pound! Armadillos, as a whole, typically have tank-like bodies with short legs and solid armor. They have a dense, leathery skin “shell” that protects them against predators.

The Anatomy Of The Armadillo

A fully grown armadillo is 15 to 17 inches long (not counting the tail) with a weight of 8 to 17 pounds and are comparable size to a cat. They walk on for legs and can even roll utilizing their strong shell by forcing they’re body into a sphere shape.

The shell of the armadillo is what most people recognize and that is for a good reason. The strong shell allows the armadillo to protect itself from larger predator’s that may try to bite the animal.

Armadillos also have really strong legs with huge front claws which aid in digging when the species needs to evade danger. The legs are short but compacted with power that also allow the armadillo to swim and even jump.

What Makes Up An Armadillo’s Shell?

The shell of an armadillo is called the carapace. The armadillo carapace is formed in the dermal layer of the animal’s skin (after development of the skeleton) and is composed of boney scale-like structures called scutes, a topped with a layer of keratin (hair, nails, and horns).

The fundamental carapace structure for a lot of armadillos is one piece covering the shoulders, another covering the back, and some bands in the middle. Limbs, face, and tail are likewise typically armored (though naked-tailed armadillos have no tail protection.)

Where Are Armadillos Found? 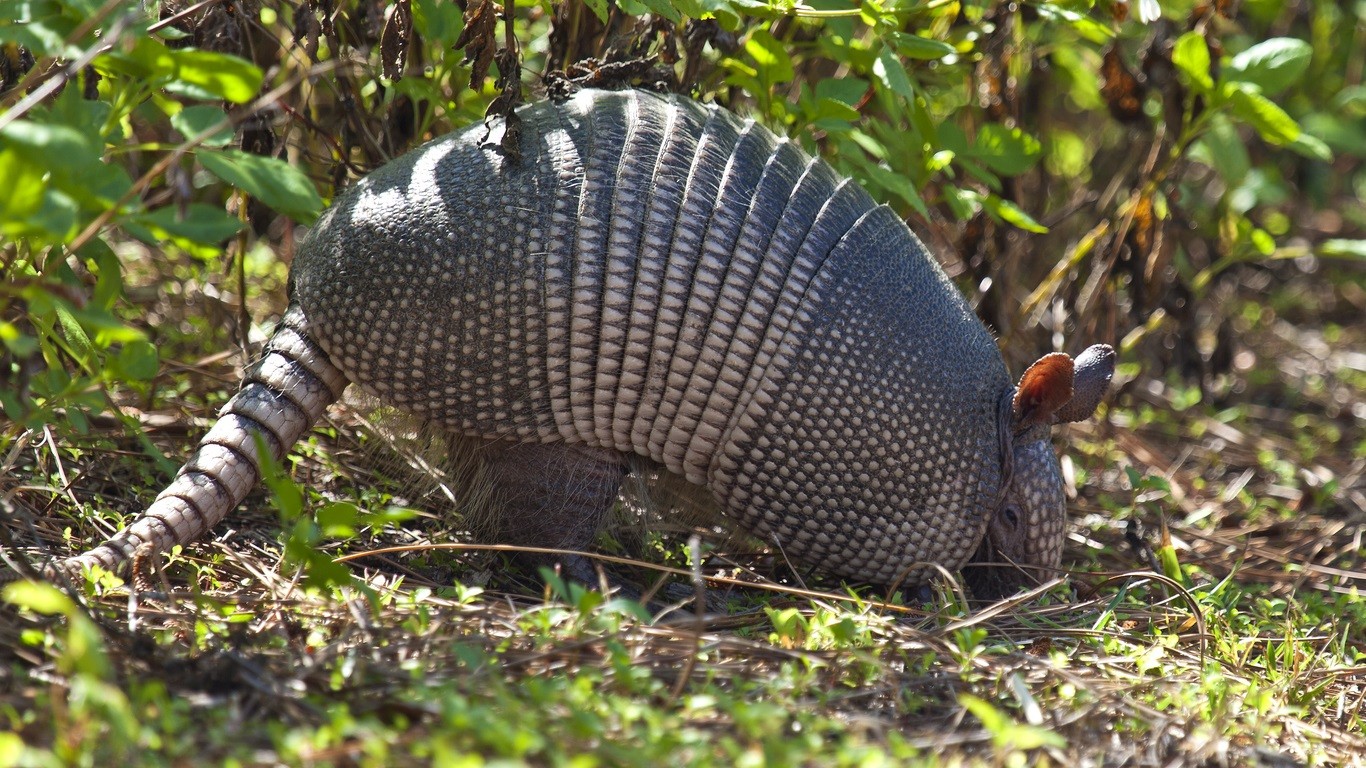 They prefer warm, damp climates and reside in forested or meadow habitats. Little streams are no obstacle for these fantastic animals. The nine-banded armadillo can hold its breath for up to 6 minutes and can swim or “stroll” along the bottom of rivers. Their abandoned burrows are utilized by other animals, such as pine snakes, bunnies, opossums, mink, cotton rats, striped skunks, burrowing owls, and eastern indigo snakes.3Source The National Wildlife Federation Go To Source

They usually gravitate to areas with loose, porous soil because they have to dig for their food and shelter. In order to survive and seek shelter from extreme weather or predators, these animals use their powerful claws to dig many burrows within their home range. The burrow of an armadillo is about 7-8 wide and up to 15 feet deep.

Behavior Of The Armadillo

Armadillos are not social animals and invest the majority of their time sleeping. They usually sleep as much as 16 hours every day in burrows. Throughout the morning and nights, they forage for food.

Normally, the only time armadillos get together is to mate or to keep warm. During cold times, a group of armadillos might hunker down in a burrow together to share heat. Often, a seven-banded armadillo will share its burrow with others of the very same gender. 4Source Live Science Go To Source

What Do Armadillos Eat?

Ants and termites are favorite foods amongst armadillos; their strong legs and large front claws help them burrow as deep as they need in order to discover their favorite meals.

When the bugs have actually been discovered, the armadillo’s long tongue does an exceptional job of extracting ants and termites from their tunnels. Armadillos secrete an especially sticky saliva to help them hang on to even the most nimble of insects.

Armadillos appear to be one of the few natural predators of the pesky fire ant. They have been known to dig into fire ant mounds throughout dry spells when other bugs are harder to discover. While this might appear extremely undesirable to anyone who has been bitten by an adult fire ant, armadillos tend to eat only the young, unprotected broods that are frequently located near the surface of the colonies. 5Source Pets On Mom Go To Source

Armadillos Near The Home 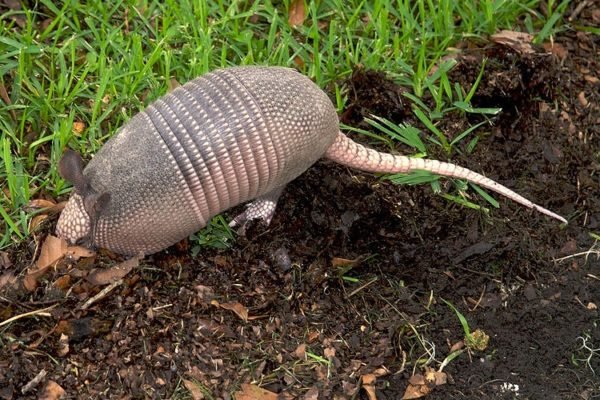 Tiny burrows, often as deep as a few feet, are the most glaring indicator of an armadillo intruder. Due to the fact that they are nocturnal, although they become active at dusk, it can be difficult to spot small creatures. The animals may be attracted in numbers by areas with high concentrations of grubs, insects, and other common food sources.

Armadillos damage lawns by burrowing and digging in search of food. It is remarkable how much destruction just one armadillo can do in simply one night.

Armadillos choose thick, shady cover such as brush, forest or lawn beside creeks or rivers. This gives them security during the daytime hours. Armadillos likewise choose sandy or loam soils to dig for food. If you property contains plenty of shade and a water source, it’s possible the armadillos will stay awhile. 6Trusted Source University Of Georgia Go To Source

How Much Damage Can They Cause? 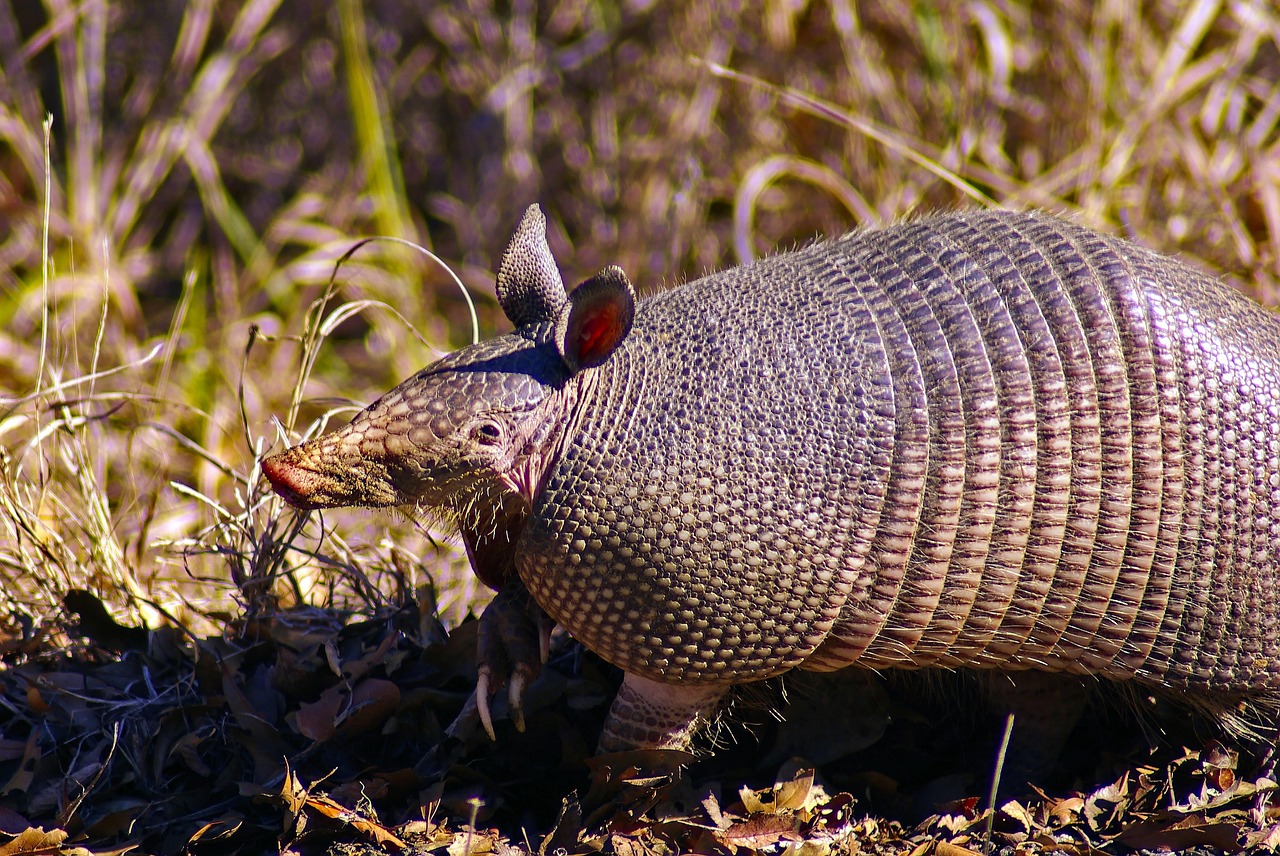 While armadillos are beneficial because they eat insects and other invertebrates, digging in lawns, golf courses, vegetable gardens and flower beds often becomes a nuisance. Their burrowing under foundations, driveways and other structures has caused some damage.

While armadillos in their quest for food often kill the nests of ground-nesting birds, there is some debate as to whether or not they actually consume the eggs. They may need to be removed when armadillos cause harm.

Another aspect that must be addressed when considering armadillo harm is disease.

An armadillo can scratch and bite when faced with a serious threat. These armored critters can transmit leprosy, rabies, and other harmful diseases by clawing and biting.

Humans aren’t likely to choose an armadillo battle, but they may be involved with household pets like dogs , cats, and rabbits. 7Trusted Source Center For Disease Control (CDC) Go To Source 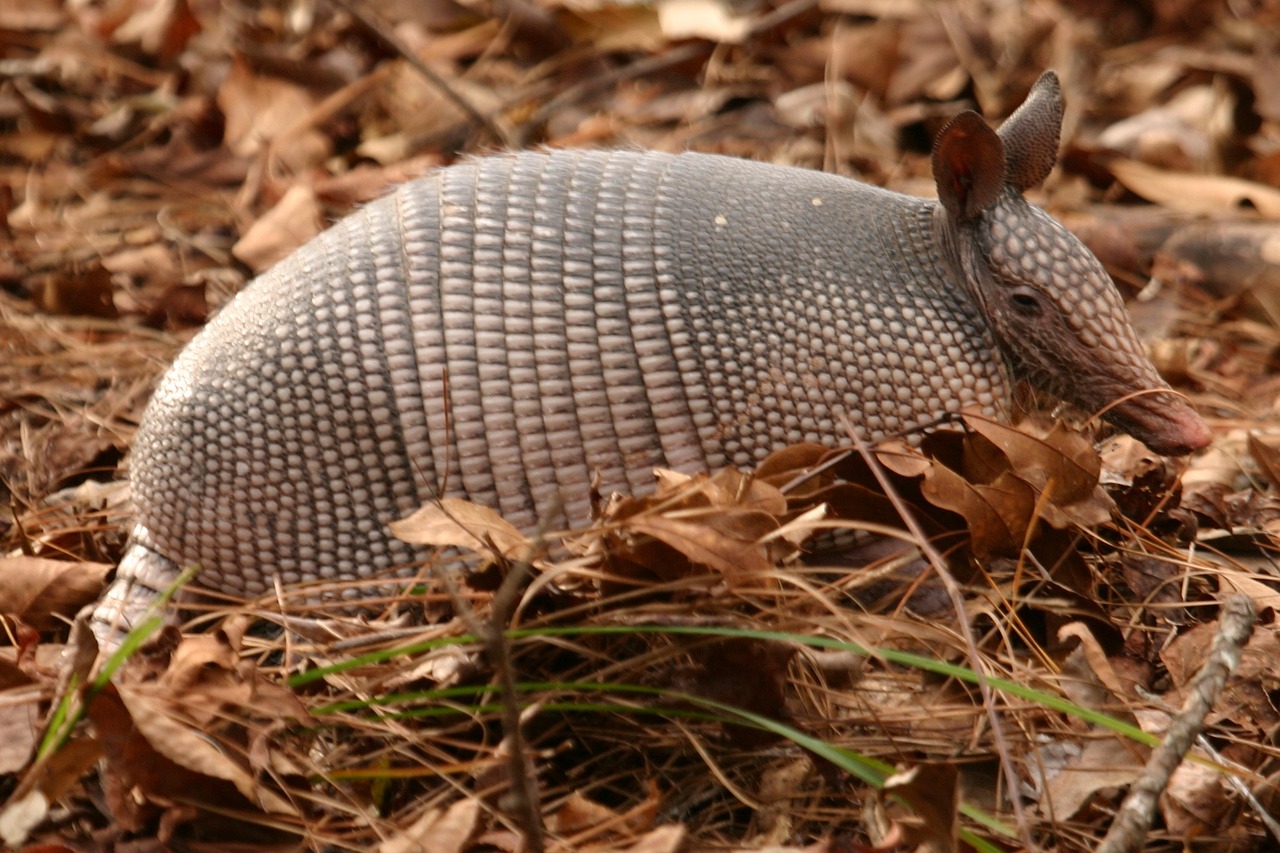 Trapping and removal can be difficult. The best way to ensure the welfare of the animal and to make sure armadillos do not find their way back to the property is to call a licensed professional to manage the operation. Without proper protection, handling armadillos can lead to scratches and increase the risk of contracting unwanted illness. Affordable Wildlife Removal has the experience and training to properly relocate armadillos from your property and help protect your property.

Summary: Armadillos are mammals known for their shield like body armor. They prefer warmer wet climates and will burrow into the ground for protection. They typically travel on their own and have the ability to swim and jump.

They eat small insects that are found in the dirt and are only of the only predators of fire ants. Armadillos are considered pests around the home due to their destruction of gardens and plants. Removing an armadillos is a dangerous and difficult task that should be left to wildlife professionals.