It’s no surprise that commercial buildings get more wildlife activity than a regular home owner. With more and more property’s being built we are forcing more wildlife out of their habitat.

At Affordable Wildlife Removal, we offer multiple humane Wildlife Trapping & products that DO NOT contain poison that all help prevent all wildlife activity.

Our first step to handling commercial wildlife nuisance is evaluating the problem and creating a solution. If you haven’t properly identified the issue or are having problems identifying it please give us a call and we’ll help you (866) 808-7277 We’re available 24/7

Our Main Priority is ensuring that we leave your business management safe and Nuisance free at all cost. Communication is key at the very moment we take your call we will keep you updated and informed on anything necessary. Jobs are welcomed from Central Florida to South Florida.

Our team of AWR expert technicians are trained to find possible entry ways such as holes, un finished cement work, broken gutters, loose bricks, nesting grounds and more. Upon arrival, our team will gather all of the necessary details and information to assess the nuisance wildlife situation appropriately. This collection of information allows us to narrow down the problem areas, discover where the animals are accessing the problem area, and pinpoint where they are entering the home (if the problem is in the home). Once the technician(s) have all of the vital information needed to form a plan of attack, the animal removal process can be started if trapping is needed. If hand capture is needed, the process is a bit different than just trap setting. .

What separates us from other company’s is our high quality work and humanely working with wildlife. Problematic situations cause for creative solutions that DO NOT include poison or anything that may injure and harm wildlife. After Capturing the animal we release the critter back into the wild on multiple private property locations all with containing over 150+ acres. If the animal is an invasive species we humanely put the animal down to keep our native wildlife protected/ We make sure our Technicians get proper hands-on training with wildlife before dispatching the technicians to a job.

After evaluation of the building or property we will discuss how we will execute and repair your property so that it prevents any more wildlife from entering. After our task is completed with make sure to cover the property with a spray that will keep any and all animals away. We also offer bioremediation. This is to get rid of any foul scented animal marking that wildlife are known to leave.

Florida is home to a wide range of bird species including the invasive Muscovy duck. These are known as a huge pest through out Florida.

Early Signs – The two main indicators of a raccoon infestation in your home is visual and audible signs. Either of these is typically proof that a raccoon has made residence in the structure’s walls or attic. A good visual indication that a raccoon infestation is present is feces and damage. Feces is usually left on the roof or inside of the attic. Dirt and prints at times are left where they climb on to the roof and can lead you to damage around entry points. 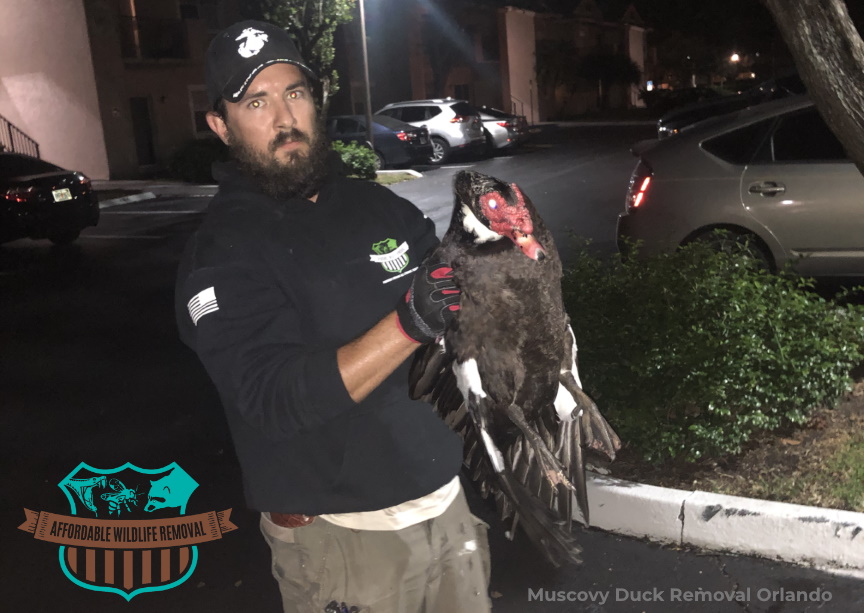 Call Us Today For A Evaluation